David Carrie keeps up with Tradition 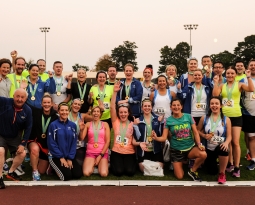 Tradition is kept up by David Carrie

Besides competing on track and field he is also a regular and great supporter of charity through his sport.

Some weeks back he looked for volunteers to join with him and train for the Dublin City Marathon, which takes place on the upcoming October Bank Holiday weekend.

David assured all comers that in the space of twenty-one weeks, with proper application and under his guidance, even novices could complete the twenty-six miles.

More than fifty eager souls of varying fitness levels and experience responded and just last weekend they all achieved their first milestone when completing a five-mile run in the Phoenix Park.

Next up is a ten miler towards the end of August that should metaphorically speaking sort out the girls from the men.

It’s a wonderful ambition on behalf of all concerned but deserves even greater plaudits given that the challenge is combined with raising funds for the Gary Kelly Cancer Support Centre.

Well done to all concerned and as they say – Keep Her Lit!