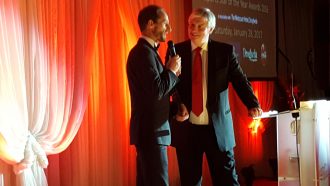 David Carrie has been presented with the Hall of Fame Award at the Drogheda Independent Sport Star Awards! Massive congratulations to a worthy winner … more to follow tomorrow.

David Carrie of Team Carrie and Dunleer AC was announced as the sports star Hall of Fame winner for 2016 in recognition of his life achievements in athletics.  The annual event sponsored by Coca Cola, The Drogheda Independent and The Westcourt Hotel chose David a two time national marathon winner as this years worthy recipient.

The awards were presented by Michael Lyster of RTE’s Sunday Game.